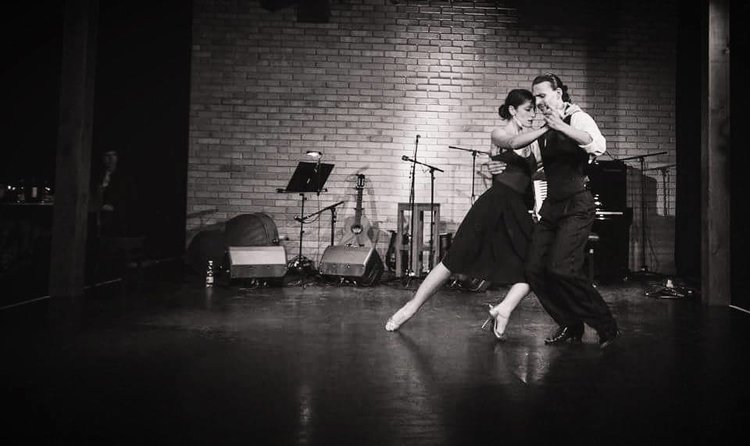 Raised in Buenos Aires, Argentina, Martin is the third generation of a family with a long-standing tradition conveying Argentine Tango internationally: from the early Milongas held by his grandfather Leonardo Acosta back in 1959 to the most recent Argentine Tango School established in London by his father, Leonardo Alberto Acosta and his partner Tracey Tyack-King.

From 1999 to 2002, Martin was a student of Maria & Carlos Rivarola, whom he followed to the Universidad del Tango to further his apprenticeship until 2003. In the same year, he participated in the Mundial de Tango (World Tango Championship), classifying among the finalists in the category Tango de Salon.

Martin has also been part of professional dance companies, such as R.E.A. Danza, with which he performed in the theatre production “Broken Tango”, and appeared on MTV UK, as he featured in the videoclip “La Musica” (Lovelle&Ray Foxx).

In 2011, he won the first prize in the 3º Open Show Dance of Andalusia. In addition, he performed in numerous events and festivals, among which the South London Festival in 2011 and the Tango Amadeus Vienna International Festival in 2013 and 2014.

Chiara was born in Naples, Italy, where between the age of 6 and 15 practiced ballet and theatre, studied music for piano, and was part of a choir. Her mother – a literature professor and amateurish pianist, her father – a writer and paintings collector, as well as her brother – a sculptor and architect, created around her an artistry and intellectual environment, exerting a strong influence on her maturation. Since then, she continued dancing although just as an amateur until completing her university studies in Communication Sciences.

It was only in 2012 that Chiara arrived to Tango, which she embraced first with Carlos and Rosa Forte-Berg. In 2014 she was a student of Raluca Nicolae in a study programme focussing on classic technique.

Together since 2013, Martin and Chiara have been dancing in numerous theatre productions and promotional events around Austria – where they are currently based – such as the Concordia Ball (2018, Rathaus), TU Ball (2017, Hofburg Wien), the Embassy of Argentina in Vienna, and the Vereinigte Bühnen Wien during the presentation of their Musical „Evita“ (2016, Raimund Theater). They worked with musician-composer Diego Collatti & his „Minimal Tango Ensemble“ (2016, ORF Radiokulturhaus), orchestra director Pablo Boggiano in the Tango-Opera “Maria de Buenos Aires” (2017 and 2015, Theater Akzent), and Flamenco choreographer Marco de Ana in „Insistencia“ (2016, 11. Burgenländische Tanztage – International Dance Festival), and “Salon Klimbin” (2014, Museum Secession Season Opening). They have performed also with The Vienna Tango Quintet & Solange Freyre, Che Tango Ensemble, Garufa, Duo Elibra, Die Besita Tango Quartet, Enrique Thompson & his Revirado Project, and Sergio Cattaneo (2018, 2015 and 2014, Theater am Spittelberg).

Abroad, they have worked with dancer-choreographer Guillermo Berzins in „Tango Fatal“ (2018), artistic director Adriano Mauriello in „Revelacion Tango“ (2017, Teatro Sistina in Roma and Teatro Duse of Bologna, among others), and have performed at the Waldorf Hotel in London, as well as in numerous other events in the UK, such us the International Dorset Tango Festival in 2018 and 2017.

They regularly travel to Buenos Aires where they continue studying and training as stage dancers, taking part in numerous classes with distinguished Maestros, in particular Alejandra Gutty in 2018 and 2016, Juan Pablo Bulich and Rocio Garcia Liendo in 2018, as well as Nora Robles and Pedro Calveyra in 2015.

In Vienna, they are the Managing and Creative Directors of the Tango Atelier, where they work as Trainers and Instructors of Tango Salon, the social art-form of Tango.

We're not around right now. But you can send us an email and we'll get back to you, asap.